130 Years of Giving Back: How Johnson & Johnson Has Helped the World in Times of Crisis

Share
What started as support for wounded soldiers shortly after the company's founding has evolved into a legacy of philanthropy that spans the globe. We look at key moments throughout history when the company has mobilized to help people, including those recently affected by earthquakes in Puerto Rico.
By Maureen ShellyNovember 29, 2016
Today's Top Reads Close
T

hroughout its storied 130-year history, Johnson & Johnson has worked in many different ways to help communities both local and global in times of crisis.

From such humanitarian disasters as the Syrian refugee crisis to epic natural disasters, like the recent earthquakes that shook Puerto Rico, here's a look at how the company—and its employees—have given back to those in need.

These stories help serve as an inspiration for how we can all play a part in helping the world when tragedy strikes. 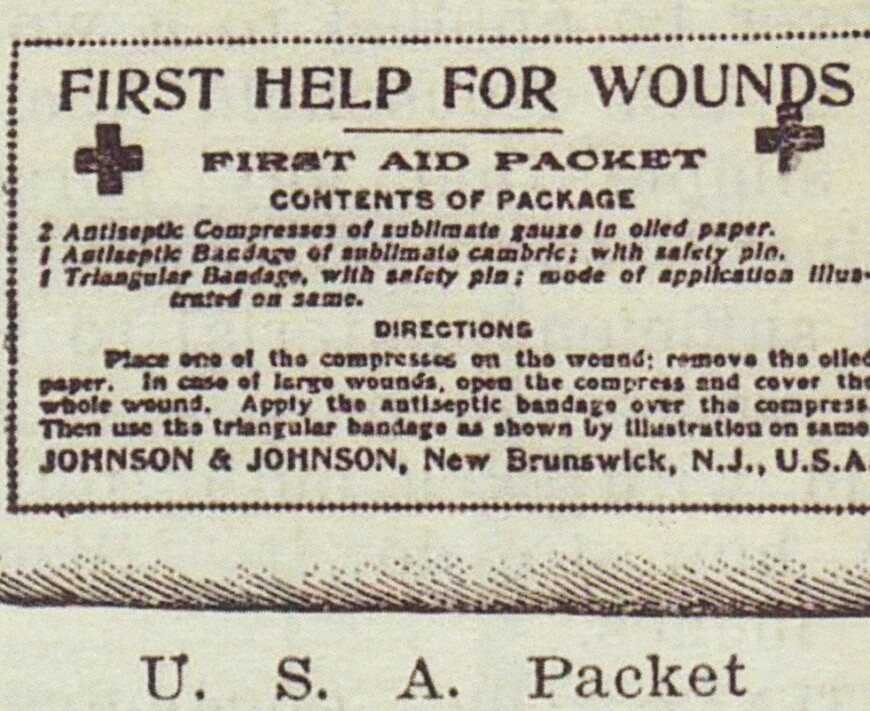 Johnson & Johnson had only been around for 12 years when the Spanish-American War broke out, and the company was called into service by the U.S. Army to help produce first aid supplies, like compresses and bandages (shown above), for wounded soldiers. When battleground demands exceeded the government’s budget, Johnson & Johnson made a moral judgment call and continued to send the supplies without compensation. 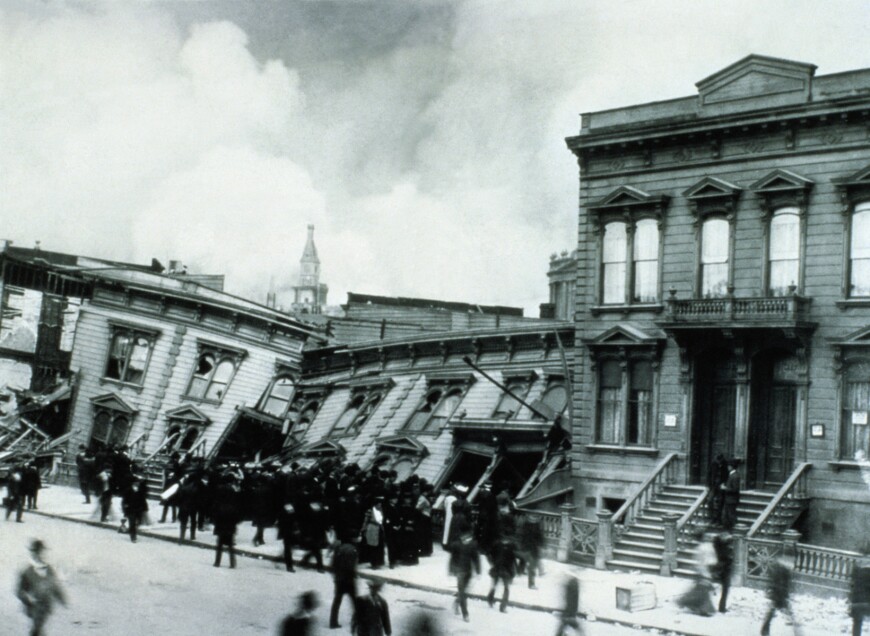 When a massive earthquake destroyed 80% of San Francisco, Johnson & Johnson responded quickly and generously. Hours after the quake hit, trains full of gauze, sutures and bandages were dispatched from the company’s New Jersey headquarters to the Bay Area, providing the city with the largest donation of post-quake medical supplies.

Stitch in Time: 18 Fascinating Facts About the History of Sutures

Johnson & Johnson also reduced or forgave the bills of drugstores and hospitals affected by the disaster. The company’s response marked the beginnings of what is now one of the oldest corporate disaster relief programs in existence. 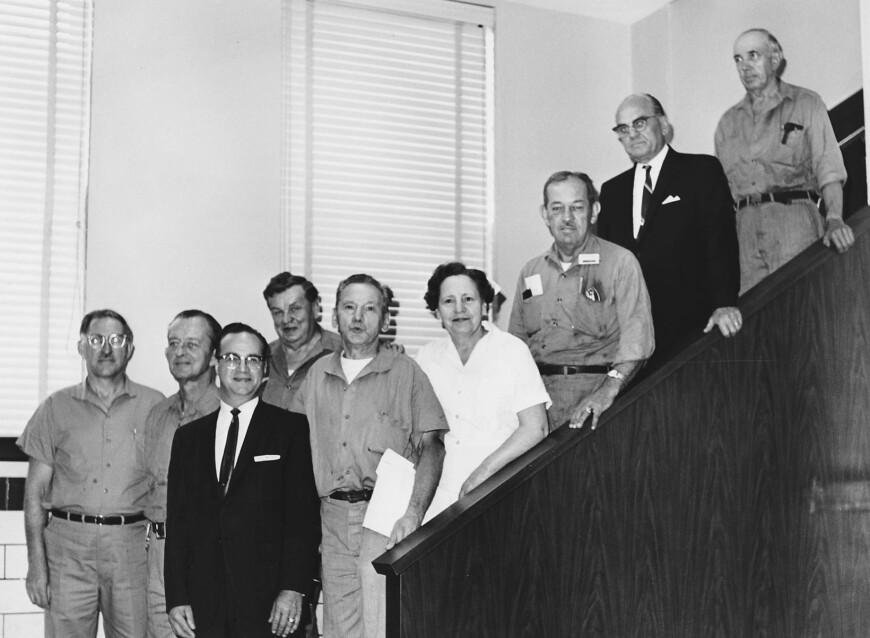 During this period in our nation's history, unemployment reached 25% after companies cut costs with massive layoffs. But Johnson & Johnson took the opposite approach: Not only did the company refuse to lay off any workers, but it also gave a 5% wage increase to all employees, and shortened the work day, so everyone could keep their jobs.

In 1933, Johnson & Johnson also bucked the trends of the era by opening a new facility in Chicago to help create new jobs. Many of those employees were so grateful for the opportunity that they remained fiercely loyal to the company—including the nine above who were still employed in 1970. 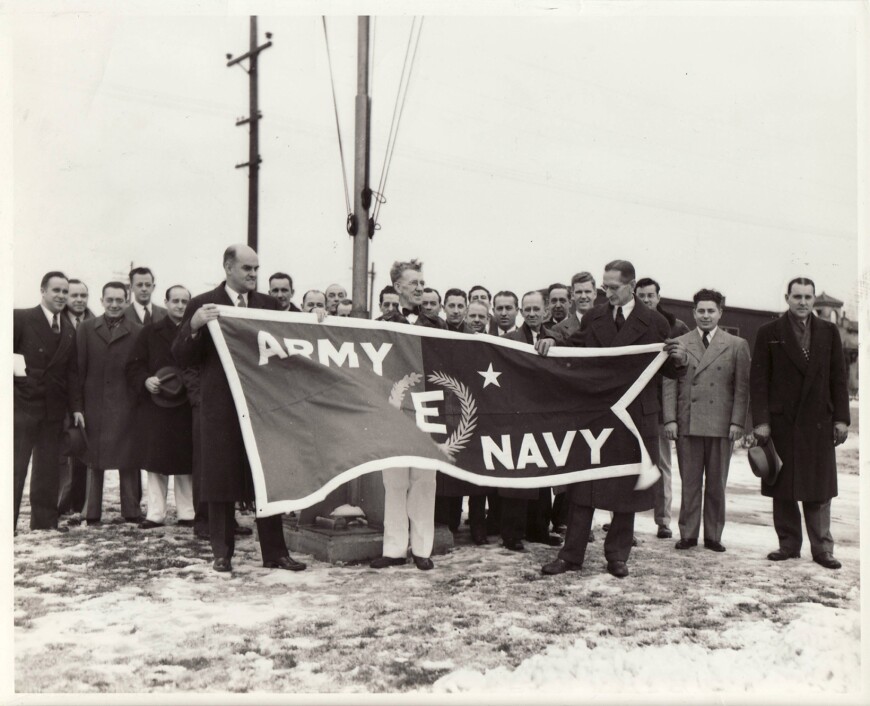 Johnson & Johnson already had a well-established reputation for product innovation when the war broke out, so when the U.S. military was looking for a waterproof tape, guess who they called for help? Engineers reworked the company’s adhesive tape products to create duck tape—later known as duct tape. The military used the sturdy, waterproof tape for all sorts of repairs, including tents, boots, jeeps and, yes, duct work.

The company also manufactured other products for military use, such as gas masks, airplane parts and camouflage material. For its contributions, Johnson & Johnson received the Army-Navy E Award for Excellence—an honor bestowed on just 5% of World War II contractors. Company employees in Chicago are shown celebrating the distinction above. 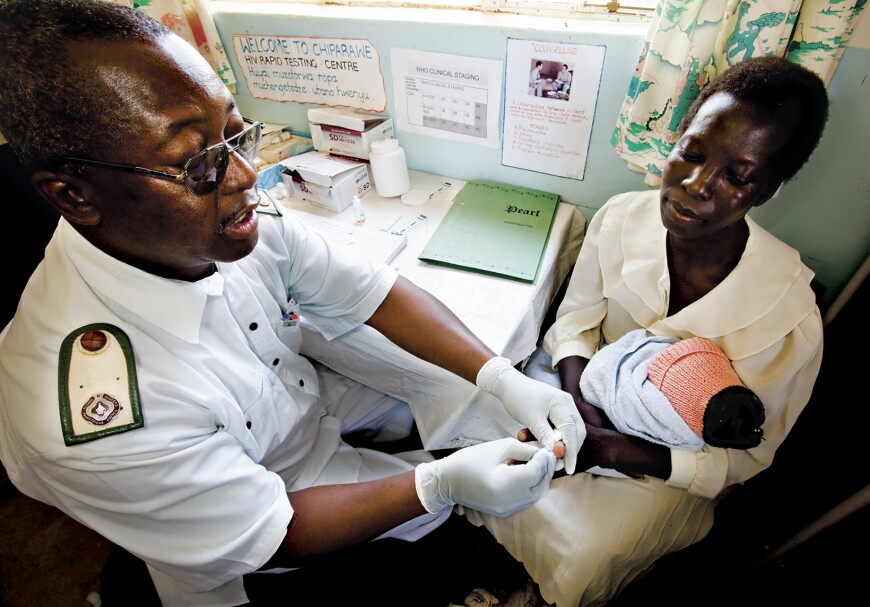 By the early '90s, AIDS infections were slowing in industrialized countries, but they were quickly climbing in the developing world—and mother-to-child transmission was emerging as a particularly serious problem. To help address this concern, Johnson & Johnson became one of the first corporate donors to the Elizabeth Glaser Pediatric AIDS Foundation, helping it grow to become the leading organization working to end the disease in children. Of note, funding from the company helped the organization open an office in Zimbabwe, where the rate of mother-to-child HIV transmission has dropped from 40% to 6.7% since 2003. 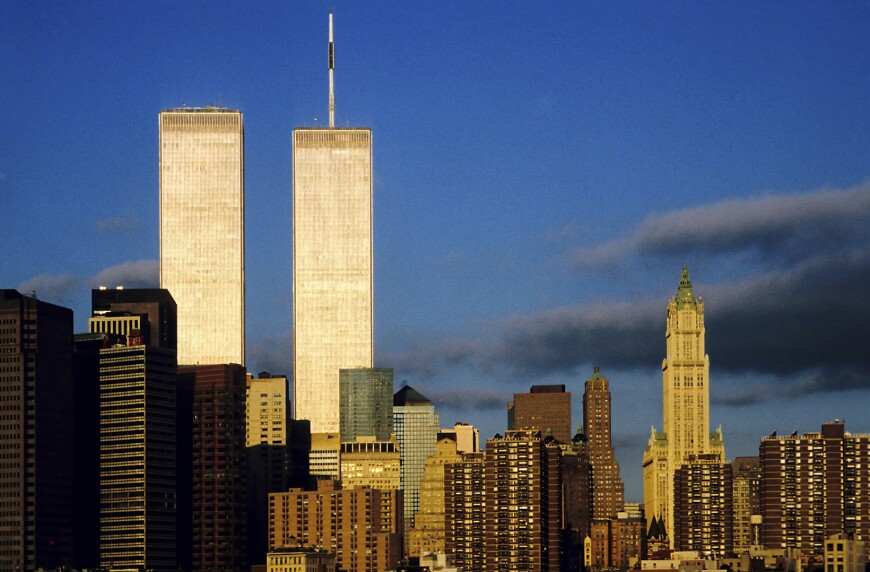 The Twin Towers were visible from the top floors of Johnson & Johnson’s New Jersey headquarters, adding a particular poignancy to a tragedy that shocked the world. The company sprang into action immediately after the attacks on the World Trade Center, arranging for medical supplies to reach St. Vincent’s Hospital—the medical center closest to the disaster site—that afternoon. The company’s distribution centers also stayed open 24/7 so that orders could be filled immediately, day or night, to help the wounded. And with civilian airlines grounded, Johnson & Johnson’s corporate aircraft received rare “Angel Flight” status to help deliver the company’s blood screening and typing products to blood centers and military bases. 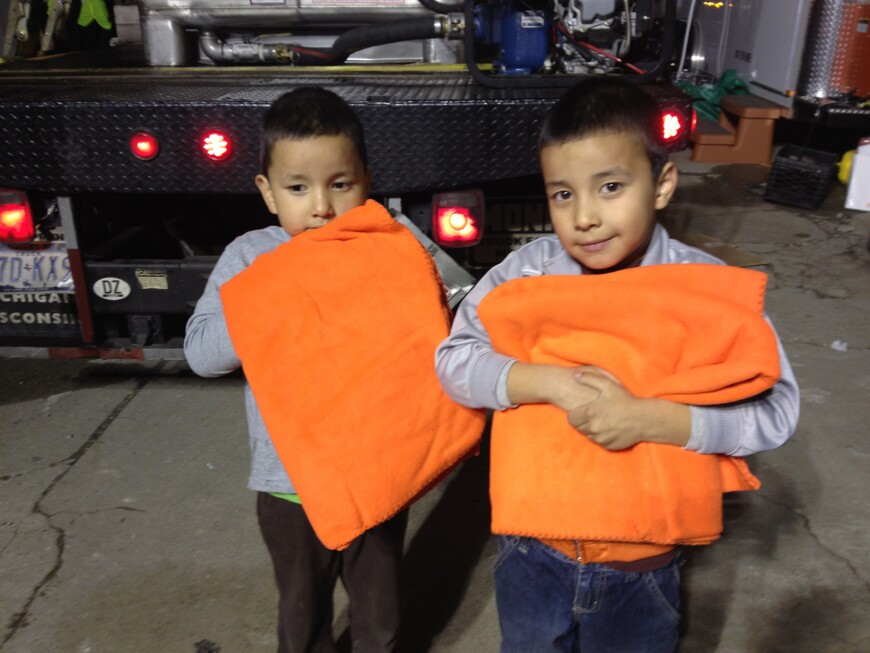 Image courtesy of Heart to Heart

The monster storm impacted millions, leaving mass flooding and power failures in its wake. Johnson & Johnson's facilities staff members lent aid in a number of ways by providing fuel to police and emergency vehicles, supplying generators to local towns and even dispatching a company fire truck to a New York City hospital to help pump out water.

Johnson & Johnson also joined forces with the American Red Cross, Save the Children and other partners to funnel aid to those most affected. In addition to distributing 20,000 kits containing such hygiene products as Listerine? mouthwash and Aveeno? shampoo to impacted communities, the company activated its "One Child, One Blanket" program to provide comfort to kids, like these boys in Far Rockaway, N.Y. 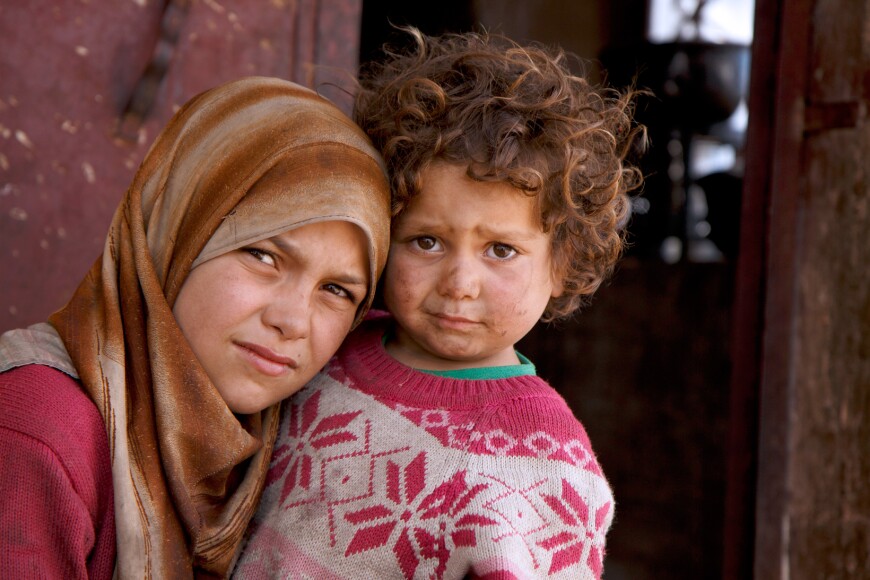 Image courtesy of Ahmad Baroudi / Save the Children

The effects of the Syrian civil war have been widespread and long-lasting. To date, 11 million refugees have fled Syria, most to neighboring countries overwhelmed by the sudden demand on their resources. Every year since 2013, Johnson & Johnson has funded a variety of services to tackle both the short- and long-term needs of these refugee families, including physician training, medical supplies and humanitarian aid. Most recently, in 2016, in collaboration with Save the Children, the company committed $1 million to fund programs designed to strengthen the resilience of refugee children and their parents.

To learn more about the work that Save the Children and Johnson & Johnson are doing to help assist refugee families—and see how you, too, can contribute to the cause—check out this Humankind video series. 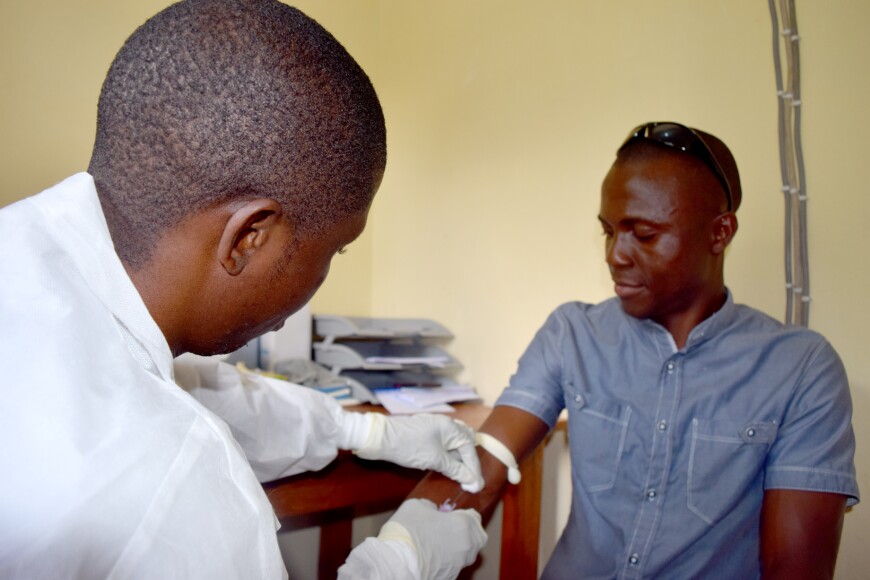 As the Ebola epidemic was raging through West Africa, Johnson & Johnson committed to accelerating and expanding production of a preventative vaccine regimen, in partnership with research institutions and other companies. In September 2016, the Janssen Pharmaceutical Companies of Johnson & Johnson applied to the World Health Organization for an emergency use listing that could potentially make it possible for the investigational vaccine regimen to be made available should another Ebola crisis strike.

Combating Ebola: How a Johnson & Johnson Vaccine Is Helping in the Fight

In addition to its vaccine efforts, the company has also supported health worker training on infection control and prevention in African countries where Ebola was prevalent. Johnson & Johnson employees came together to assist survivors of the storm, which was one of the most destructive hurricanes in U.S. history. When Hurricane Michael made landfall on October 10, it obliterated many coastal areas of the Florida Panhandle, leaving tens of thousands of people displaced.

Johnson & Johnson worked with state and federal agencies and local organizations to ensure that these and other deliveries, including medical supplies donated by company partners, got to the people who needed them the most. 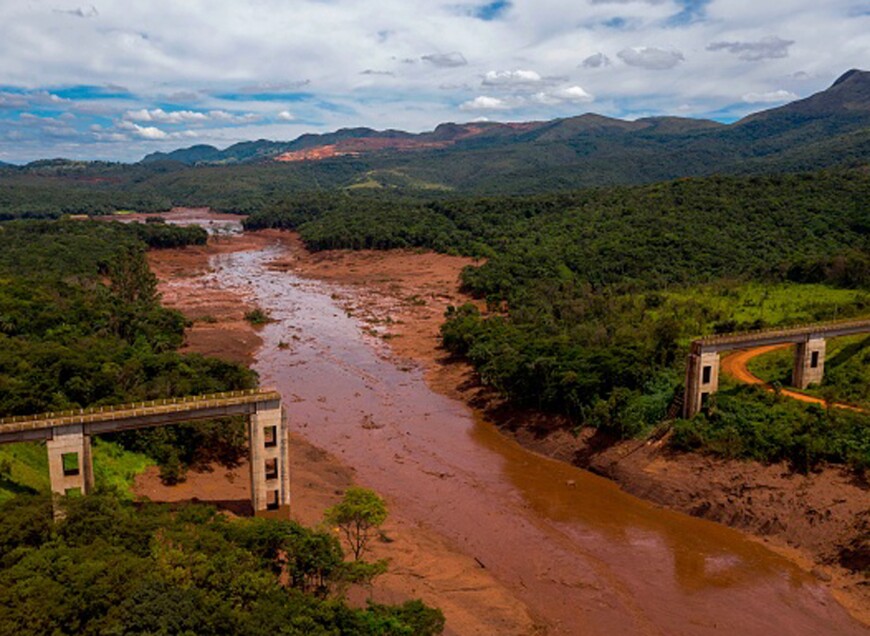 On January 25, 2019, a massive mining disaster occurred in Brumadinho, a city in southeastern Brazil, when a dam that had been constructed to hold back iron ore waste burst and released millions of tons of muddy sludge into the surrounding countryside—burying homes, contaminating the water supply and leaving several hundred people missing or dead.

Disaster Modules: How a Single Kit Has the Potential to Help Save Lives Around the World

When executives at Johnson & Johnson Brazil in S?o Paulo learned of the disaster, they immediately contacted the Brazilian government to ask how the company could help. The answer: Communities were in dire need of personal care supplies for the hundreds of people who now found themselves homeless. 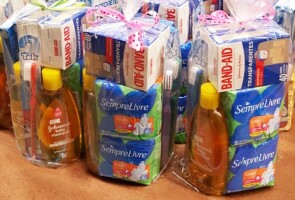 A group of 18 employees from the S?o Paulo office quickly came together to assemble 500 hygiene kits (shown at right) stocked with such everyday necessities as Johnson’s? Baby Shampoo, BAND-AID? Brand adhesive bandages and Tek? toothbrushes, which are made in Brazil.

In total, 2 tons of Johnson & Johnson consumer products were donated to those affected by the disaster.

"Our team was really committed and worked hard to make the donation possible," says Ewerton Nunes 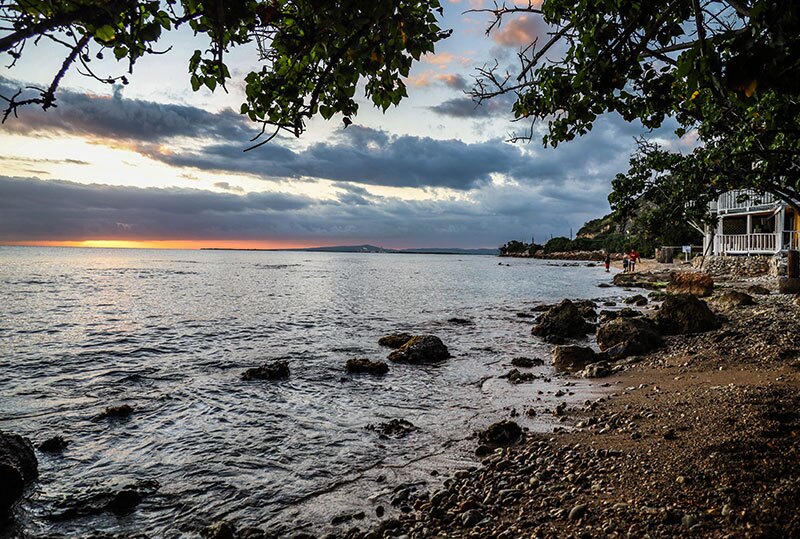 Southwestern Puerto Rico was struck by a series of over 2,000 earthquakes in late 2019 and early 2020, including one with a magnitude of 6.4—the island’s most destructive quake in a century.

The resulting destruction devastated communities and demolished homes and buildings, forcing roughly 7,500 people to look for other kinds of shelter, including cars and tents.

Johnson & Johnson Pledges $600,000 in Disaster Relief in Response to the Bushfire Crisis in Australia
Share expand 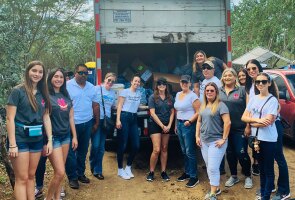 The disaster hits close to home for Johnson & Johnson, which employs more than 4,000 people across Puerto Rico. Employees from offices and manufacturing facilities in Guaynabo, San Lorenzo and Manatí (shown at right) mobilized quickly in January to help victims by distributing everything from personal care supplies and over-the-counter medicines to tents and food.

“It is in times like these that Our Credo sustains us, and reminds us that we have the power to bring hope and relief to the communities in which we live and work,” says Angelique Valentín, Regional Sales Manager, Infectious Disease & Neuroscience, Janssen, and co-founder of Regalo Supremo, a non-profit that helped with packing and delivering the supplies. “During our volunteering, we experienced first-hand the resilience, courage, spirit and gratitude of our Puerto Rican brothers and sisters in the southern part of the island.”

This disaster is especially challenging for an island that is still recovering from Hurricane Maria in 2017, which was the strongest hurricane to hit Puerto Rico in more than 80 years. In its aftermath, Johnson & Johnson and its employees donated over $2 million in cash, products and supplies directly, and through partner agencies, to aid victims. Now, the company is double-matching U.S. and Puerto Rico employees' monetary donations through the Johnson & Johnson matching gifts program.

When You’ve Been Innovating for Over 130 Years …
Johnson & Johnson has a virtual museum where you can learn more fun facts about its rich history.
Check it out
? Albert Vecerka/Esto. All rights reserved.